With their ultra-smooth rotation, these swivels are 1-1/2 times stronger than standard barrel swivels relative to their size.

Regular price $119.99 Save $-119.99
The BG series ranges from ultralight freshwater actions to heavy big game saltwater models. With a strong black Anodized Machined Aluminum Housing and a solid screw in handle this reel is extremely rigid.

Regular price $4.99 Save $-4.99
ANDE Premium monofilament is our standard production monofilament and is perfect for the vast majority of anglers. It is a medium-soft monofilament with excellent tensile and knot strength and it is very abrasion resistant.  A great value!

A classic that should be in every tackle bag!  One of the most versatile metal lures ever. For freshwater or salt, multiple sizes and colors-a proven lure for virtually any sports fish.

Nothing triggers bass and inshore predator fish like the subtle walk-the-dog action of a Rebel Jumpin’ Minnow. This slender minnow-shaped topwater bait sashays back-and-forth on the surface to create a hypnotizing action like that of a fleeing baitfish. Internal weighting allows for long casts with this slender bait, making it perfect for schooling fish and anytime fish are feeding on top.

This is the lure that started a revolution and a new category in fishing lures. Slug-Go is the Original lure that created a generation known as Soft Stick baits.

By having a slender profile and erratic darting action this lure broke the boundaries and was the first to expose the effectiveness of having action that was imparted to be random in movement and not repetitive as all other lures before its time.

12" pre-rigged Slug-go's have become a hot item for larger fish recently. Untold numbers of huge fish have been caught on these tandem rigs over the past few years. We developed techniques to mold the rigs into the lure which produces a more durable and straight rigged lure. It can not be stressed how important it is to rig this straight for the action of the lure to be the most effective.

Rubbercor® slips easily on and off your line. Just give the rubber ears a half twist in opposite directions and Rubbercor® is ready to take your bait down to where the fish are biting.

Your line is protected by the rubber core inside the lead sleeve. To remove, simply twist the ears back to their original positions.

Incredible impact and abrasion resistance. Fast sinking. Superior tensile and knot strength. Seaguar Blue Label 100% fluorocarbon leader material allows you to use a smaller-test leader than comparable nylons or fluorocarbon for unmatched bait presentations. No wonder it’s preferred by anglers the world over.

This VMC® traditional O'Shaughnessy 4x strong treble hook is forged from the finest high-carbon steel. After years of service it is still the hook of choice for lure makers and fishermen looking for maximum strength and sharpness at an affordable price. THE BIGGEST THING IN SALTWATER HOOKS IS ACTUALLY MICRO THIN. Imagine a hook made specifically for saltwater with built-up layers of ultra-thin black finish to withstand the harsh conditions of the saltwater environment. Introducing the COASTAL BLACK™ series from VMC. High corrosion-resistance for the longest-lasting black finish in the saltwater market with ultra-sharp, multi-step chemical sharpened hooks. Such a big advancement, all the fish in the sea will be hooked on it.

TwistLOCK Light with Centering-Pin Spring (CPS-patent pending) is a lighter version of our TwistLOCK bass hook. With guidance from bass fishing professional and lure designer Gary Yamamoto, the TwistLOCK Light was created as the ideal hook for rigging Senko-style baits and other thinner profile plastics. With Owner's unique "Centering-Pin Spring" (CPS - patent pending) attached to the hook eye, baits can be "permanently" secured by inserting the pin in the center of the nose of a soft plastic, which can then be screwed onto the TwistLOCK coil spring so that any bait will rig perfectly everytime! The "Open" gap allows for more positive hook sets. Features include a 30° eye-bend, an X-strong forged shank, Super Needle Point, and black Chrome finish. 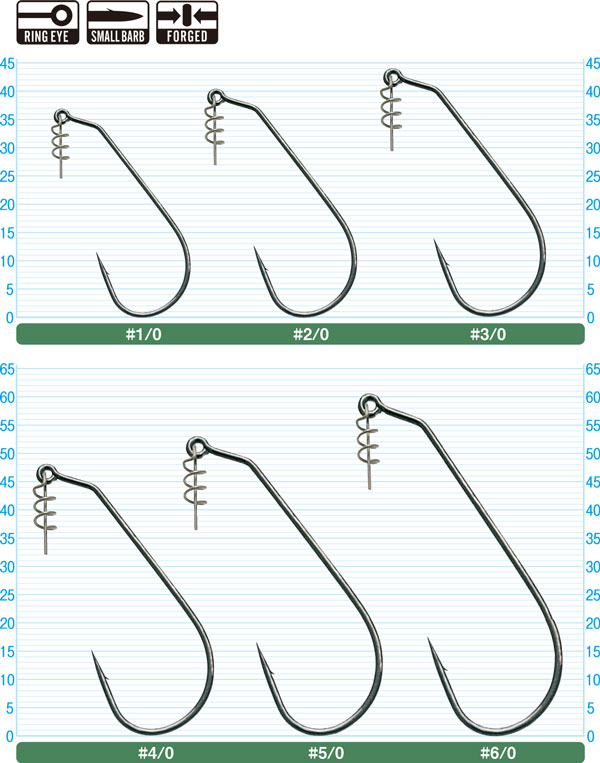 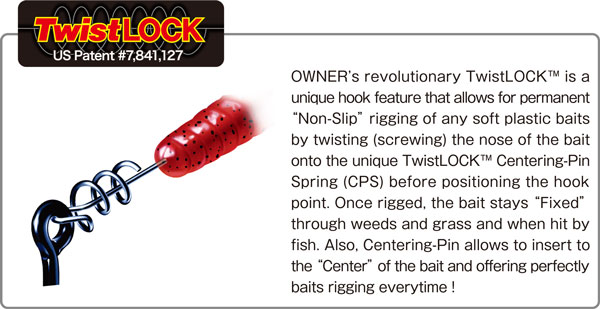 The Fin-S fish original fork tail minnow has been a part of Lunker City since the beginning. The first by design as a soft "fork tail Fish" for Texpose rigging and jigging. This lure doesn't quit when it comes to catching multiple species of fish all over the world.

When you need to count on a lure to get it done the Fin-S Fish will make it happen!

PowerPro braided Spectra fiber with Enhanced Body Technology (EBT) gives you awesome handling performance on any reel. Unlike the older style braided lines, fishing with PowerPro is as easy as fishing with monofilament.

An incredibly round, smooth, and sensitive line, PowerPro doesn't bury in the spool, and casts long and smooth -- even after a hard strike. PowerPro outperforms monofilament lines in any situation and leaves other superlines in the dust.

One of the strongest Bass hooks on the market, 4X-Strong. This hook was designed with a few things in mind, heavy braided line and big baits.  Made from Zo-Wire which is stronger than other traditional high carbon steel wires.  With the point riding slightly above the eye, this is a true weedless hook.  Can be rigged with Flipping baits, swimbaits, and everything else in between.  Other Features include a forged shank for added strength and a Silky Gray frictionless finish that encourages superior hook penetration. 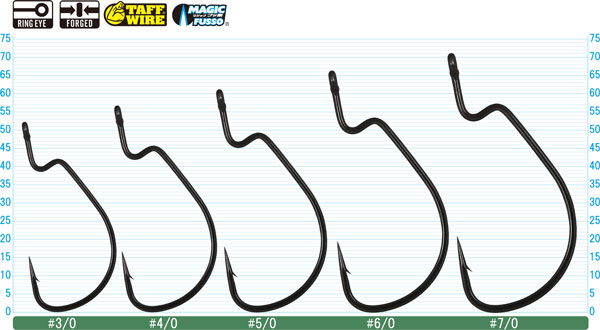 For a higher level of performance, the Daiwa Procyon AL spinning reel family is back for the attack whether that means freshwater or inshore applications. From speckled trout, redfish, and snook to bass, walleye, and trout, the Procyon AL offers anglers the perfect reel for the pursuit.

The Procyon AL is rich in its feature set. First, the reel series features an aluminum body that allows less body and frame flex providing better support on the gears and bearings allowing increased torque and power while also allowing longer life to the gears. Anglers will find that the aluminum body of the Procyon AL is incredibly lightweight when they pick it up and put it on their favorite rod.

The Procyon AL also features an air rotor engineered to be very rigid, especially at high drag pressures with little flex. The Procyon AL also has generous cut-outs in its engineering design, which reduces the weight of the rotor. The new reels also showcase a tubular air bail that reduces weight and offers more rigidity than standard wire, so you get less flex and bending or breaking. The tubular air bail is also manufactured with thicker material that feels good on the fingers when flipping the bail by hand.

Another element of the series is DIGIGEAR technology, digitally cut to reduce weight, and considerably better gear meshing increase smoothness and gear wear.
Anglers will also find Daiwa's distinctive Advanced Tournament Drag (ATD) a benefit for setting the hook and fighting fish. When you set the hook, the reel instantly adds drag resistance, and then as the fish starts pulling drag, the ATD drag curve automatically returns to your prescribed setting.

Daiwa’s Automatic Tournament Drag uses an improved drag grease that exhibits a low viscosity at rest, yet becomes more viscous immediately after drag start up. This reduces initial drag start-up inertia and combined with the structural changes of the ATD Drag System results in a smoother drag from the initial hook up.

Daiwa J-Braid X4 Line - Island Blue is made in Japan and offers a pure round profile thanks to its ultimate quality-tight pitch 4 or 6 strand woven construction.

The Finest FireLine® Ever! The scientists at Berkley® have applied the famous FireLine® process to thermally fuse a remarkably strong 8-carrier PE fiber braid. The fused 8-carriers create a line that is tougher, rounder and smoother, delivering longer casts than ever before.

Regular price $9.99 Save $-9.99
Get organized with three storage boxes that are identical in size but feature unique compartment layouts. A waterproof O-ring seal keeps moisture out.

From hooks and weights to swivels and split rings, keeping terminal tackle organized and protected can be a real challenge. Our Waterproof Terminal Tackle Accessory Boxes (3-Pack) is the perfect tool for the job — each of the boxes is identical in size but features a different layout of compartments. A waterproof O-ring seal keeps moisture out, and clear construction makes it easy to find the specific item you need.

This is the lure that started a revolution and a new category in fishing lures. Slug-Go is the Original lure that created a generation known as Soft Stick baits.

By having a slender profile and erratic darting action this lure broke the boundaries and was the first to expose the effectiveness of having action that was imparted to be random in movement and not repetitive as all other lures before its time.

12" pre-rigged Slug-go's have become a hot item for larger fish recently. Untold numbers of huge fish have been caught on these tandem rigs over the past few years. We developed techniques to mold the rigs into the lure which produces a more durable and straight rigged lure. It can not be stressed how important it is to rig this straight for the action of the lure to be the most effective.